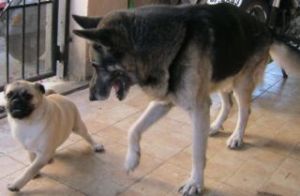 I have two dogs - Pluto and Buzo. The pup, Buzo, is a great runner.

One day, I was walking home with Pluto and Buzo (both on leash) at a steady four kilometers per hour. But Buzo is really mischievous; he strained and strained at the leash because of which I found it impossible to manage both the dogs. With six kilometers still to walk, I had to let Buzo off the leash.

Can you find out the total distance Buzo had run since he was let off the leash? And, by the way, this was a cooked up story; neither have I ever walked six kilometres in my life nor has Buzo ever shown so much energy - he would rather snooze than run around!