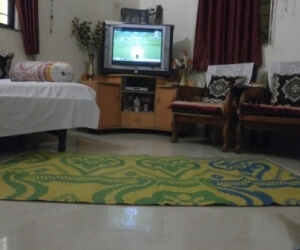 The Sunday feature film, programs like Chitrahaar, and the regular cricket test matches (yes, there used to be only test matches then; no limited-over matches) drew us children to the neighbour's home like a magnet. That we were invading somebody's privacy never occurred to us; the neighbour was tolerant and allowed us to sit in front of the television for the feature film, Chitrahaar, and cricket matches.

There were eight of us - four boys and four girls. A large straw mat used to be laid on the floor, and we had to sit on it in a single straight row. Now the boys always sat together and the girls sat together. So, just to explain how we sat let me designate a starting point "S". Starting at "S" the children would sit in the following ways: BBBBGGGG or GGGGBBBB where B represents a boy and G represents a girl. I hope you got that. Of course although these were the two ways the children sat; but among themselves the boys could sit in any order, and so could the girls. What I mean is that if I specifically represented the boys as B1, B2, B3, and B4, and the girls as G1, G2, G3, and G4, then the boys could sit in the order B1B2B3B4, or B1B4B3B2, or any other order. The girls, too, could sit in any order within their own group.

I was wondering in how many ways we could have arranged ourselves. Will you help me figure this out?