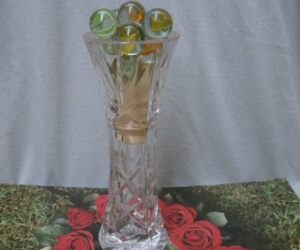 While returning home from the office, I went to a nearby store and purchased some marbles for my son. He had been pestering me for the past one week to buy him marbles.

You should have seen the sparkle in Ravi's eyes when I showed him the small glass balls. Well, if he thought he was getting them just like that, he was wrong. I wanted to teach Ravi a few arithmetic lessons using the marbles.

I set him to work at once. I told him to divide the marbles into groups with each group containing three marbles. I, then, asked him how many groups he had formed and, accordingly, to tell me the total number of marbles. The little fellow did as he was bid and correctly told me the total number of marbles. He told me that after grouping the marbles in threes, two marbles remained.

"Never mind," I said and asked him to repeat the exercise with four marbles in each group. He grouped the marbles, multiplied the number of groups by four, and told me the answer. This time, one marble was extra.

Well, I was wondering how many marbles would have been left over if I had asked Ravi to form groups of marbles with each group containing 84 marbles. Can you help?