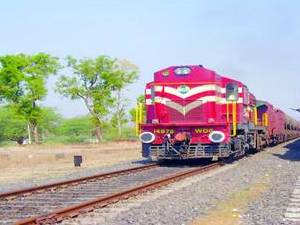 My uncle had come on a visit from Mumbai. After spending a few days with us, it was time to return. My uncle is a fun person to be with so long as he does not start asking math puzzles.

During the entire period of his stay with us, he did not ask a single puzzle. So, I thought it safe to see him off at the railway station.

It was a mistake. At the station, we got to see trains arriving and leaving. It gave an idea to uncle.

He turned to me and said, "Two trains start at the same time, one from Mumbai to Pune and the other from Pune to Mumbai. They reach their destinations one hour and four hours respectively after crossing each other. How fast is the faster train than the other?"

Just then, uncle's train arrived, and he had to rush to board it. I heaved a sigh of relief, and waited on the platform. However, after finding his seat — a window seat — uncle pressed his face against the window bars and said, "Hey, send me the answer by e-mail."

The guard blew the whistle, and the train moved. But I have to send an e-mail, so please help me.