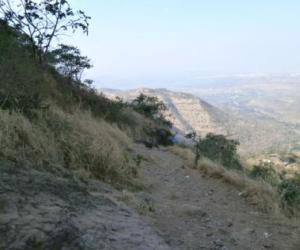 Sunday saw Prashant in a mood to do some trekking. He decided to climb a nearby hill fort.

Prashant reached the base of the fort and began his climb to the top. It took him three hours to reach the summit. He had started at 9am and it was at 12 noon he found himself at the top. Boy, it was tiring! But, then, it was fun at the same time. On reaching the summit he felt as though he had conquered the Mount Everest!

It was a cheerful atmosphere at the top. There were a large number of food stalls, and people were feasting on the local delicacies while enjoying the awesome view. Children were playing. All in all, it was like a fair.

Prashant spent a few hours exploring the fort, had a nice meal, and then began the descent at 4pm. The descent was swifter. He was at the base at 6pm. The climb down had taken him two hours.

On his way home, Prashant wondered if he had stayed at the fort overnight and started his descent at 9am the next day (the same time he had started climbing the fort), following the exact path he had taken on his climb, would there be any spot along the route where he would have found himself at the same time on both the days?

Can you help solve this puzzle? Of course, starting the descent on the next day does not imply that refreshed by the rest Prashant would have reached the base any quicker; the descent would still have taken two hours.