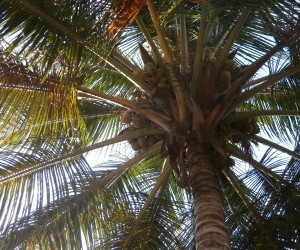 Five friends decided to jointly take up coconut cultivation. They started with a few coconut palms. The friends had trained a monkey to pluck the coconuts from the palms.

It was harvest time and the monkey set about its job and plucked all the nuts. It was not an easy task for one poor monkey!

Anyway, the nuts were heaped and kept aside without being counted. The friends wanted to have their lunch and a siesta before they started counting. After a good lunch, the friends lay down under the shade of the palms and soon started snoring.

One of the friends woke after some time. He saw that the others were still asleep and, so, decided to count the nuts and set aside his share. He made five equal heaps but one coconut was in excess. He gave away this coconut to the monkey, removed his share, and went for a long stroll.

The second friend got up. He had a similar idea. He counted the nuts (the coconuts that remained after the first had taken his share). He also made five equal heaps. He too found that one coconut was in excess which he gave away to the happy monkey. He took his share of the nuts and hid them in a safe place. Then he went for a stroll.

Friends think alike. The third friend got up. He made five heaps of the remaining coconuts, found that one was in excess, and gave that away to the now thrilled monkey. He kept his share in a safe place and went for a stroll.

The fourth got up. He was surprised to see such a small heap of coconuts - he was sure that there had been more (he didn't know that the others had taken away their shares). But thinking nothing of it, he did what the three others before him had done. He also found one coconut in excess which, of course, found its way to the monkey. Taking away his share and keeping them among his personal things, the friend also went for a walk.

The fifth woke up. He shook his head in disbelief when he saw the small heap of coconuts, and threw a suspicious glance at the innocent monkey who was now playing with the four empty coconut shells. Nevertheless, the monkey received another coconut when the fifth friend had made five equal heaps and found one coconut to be in excess.

After the fifth friend had made five equal heaps, there were 255 coconuts in each friend's share.

When the other friends returned they each told what they had done (they were honest fellows) and the coconuts had to be redistributed all over again. Can you tell how many coconuts were there in all?