Who is the Winner? 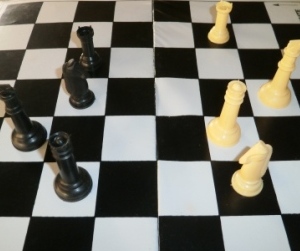 The Das' and the Nairs are next-door neighbours, and are very good friends. Their friendship is cemented by their common love for the game of chess.

Mr and Mrs Das, and Mr and Mrs Nair get together every Sunday and play a chess tournament. The winner is treated to a lavish dinner by the remaining three.

Last Sunday too the Das' and Nairs met for their customary chess competition. The salient features of this competition were as follows:

2. In the three games that were played, the men won two games while the women won only one game.

3. The Das' won more games than the Nairs.

4. Finally, as already stated, anyone who lost a game was out of the competition and could not play any more games.

From these details can you help me find out who got to enjoy the free dinner?