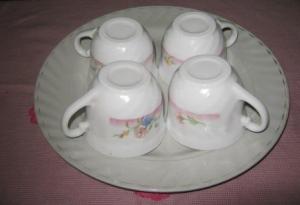 During Holi, a fair was organised near my house. One of the main attractions at the fair was a contest.

The participants had to correctly guess as to which sweet lay covered by which cup. Those who guessed all the four correctly were awarded prizes. The names of the sweets are displayed on a black-board so that participants did not forget the sweets they had been shown.

Now, 50 children participated in the contest. When the cups were removed to reveal the sweets, it turned out that 32 of them had not been able to identify even a single sweet correctly. Eight children had made one correct guess while getting the remaining three wrong, while six children had correctly identified two sweets and got the remaining two wrong.

The question is: Can you tell how many children made ONLY three correct guesses and how many of them got all the four right?