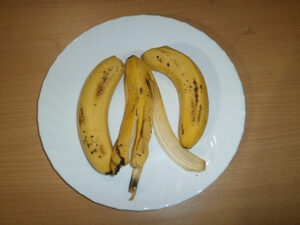 Five children - Anil, Bipin, Chandra, Deepak and Edwin come to me for some coaching with their studies. The children are very mischievous and are always up to some prank. One day I bought three bananas, and kept them on the table. The children had already arrived. I told them to wait for a while as I wanted to have a wash. After returning, I found one banana had been eaten and the skin carefully placed on the table itself.

I smiled inwardly recalling the pranks I had played as a child myself. But the culprit had to be found out and reprimanded for taking things that did not belong to him. It had to be the work of ONLY ONE OF THE BOYS.

I questioned them and each made three statements of which TWO WERE TRUE AND ONE WAS FALSE. From the statements can you help me find the banana eater?

These are the statements made by each boy; remember each of them made TWO TRUE STATEMENTS AND ONE FALSE STATEMENT.

2. I have not eaten any banana since the last one month.

2. I did see the bananas kept on the table.

3. I feel scared to touch things that dont belong to me.

2. I don't take things that do not belong to me.

3. Anil lied when he said I ate the banana.

3. I do not touch things that do not belong to me.

Well! From the statements can you determine who had eaten the banana?