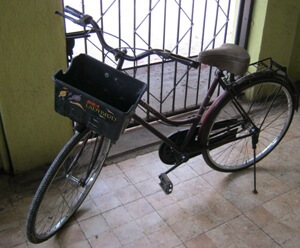 Rohan wanted his dad to buy him a bicycle.

The ten-year-old boy studied in a school that was three miles away from home. After school, he went for music classes and to the sports ground.

"I have to travel a lot; a bicycle would be very convenient," Rohan told his dad.

Vilas, Rohan's dad, promised to buy him a bicycle. But there were no stores in the vicinity. Vilas felt tired after returning from work and did not feel like going to the city centre to buy a bicycle. So, he kept telling his son they would go some other day. Rohan had almost given up hope of getting a cycle.

A new store, which sold bicycles and tricycles, recently opened in the vicinity. Rohan's birthday was only a few days away; Vilas decided to gift a cycle to his son.

It was a good store. There were only bicycles and tricycles. Rohan went around to select a cycle for himself while Vilas busied himself with counting the number of wheels and pedals.

"How many bicycles and tricycles were there in the shop?" Vilas asked Rohan when the two stepped out of the shop after buying a bicycle.

"I did not count," Rohan said.

"Well, I counted 132 wheels and 112 pedals," Vilas told Rohan. "If you now tell me how many bicycles and tricycles were there in the shop, I will buy you a nice cake as well."

Please help Rohan solve this problem so that he gets to eat a cake.