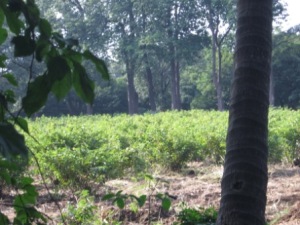 (This is a poor translation of 'Bolai', a story by Gurudev Rabindranath Tagore. The objective is merely to urge readers to read the original in Bengali, or better translations. This is a simple story but sprinkled with few complex thoughts. First the story: Bolai is a motherless child, and is entrusted to the care of his uncle and aunt. The uncle and aunt are themselves childless; that perhaps is the reason why the aunt loves Bolai all the more. She loves the child as though he were her own son. Bolai is a quiet child who is in complete harmony with nature - trees and plants are his best friends. He nurtures a silk cotton seedling which grows into a big tree under his care. Bolai has a special affection for the tree. But the tree is an eye-sore, and has grown right in the middle of the pathway. The uncle wants to chop it down, but Bolai would have none of it. Several years later, Bolai's father comes to take him away and move abroad. Bolai must bid farewell to his uncle, aunt, and the tree. Bolai cannot forget the tree and writes a letter to his aunt requesting her to send a photograph of the favourite tree. But the letter arrives a trifle late because the uncle, with Bolai no longer there to hinder him, has already chopped down the tree. So, no photographs can be sent. However, the aunt is very distressed. She was unhappy because the boy was taken away from her; in her unhappiness the tree provided her solace as it brought fond memories of her dear Bolai. But, now, even that tree had been cut down!

We have endeavoured to provide a short explanation of each of the complex thoughts at the end of the page in which they find mention. However, please be warned that these are personal interpretations and, so, may be inaccurate explanations)

It is said that human life constitutes the concluding chapter in the evolutionary history of all creatures. It is known that characteristics of various animals become manifest in human beings. In fact, the creature whom we call human being is one who has blended all living creatures into one within himself - the cows and tigers are kept in the same enclosure; the snake and mongoose are trapped in the same cage. As an analogy consider the creation of melody: melody comes into being when the individual notes of sa-re-ga-ma are stringed together harmoniously - the individual notes cannot, thereafter, cause trouble. But, even within the melody, there could some individual notes which surpass others and stand out - sometimes it is the ma which reigns supreme, sometimes it is the ga, or sometimes it is the pa which calls attention to itself.1

My nephew Bolai - somehow the musical notes of the plants and trees were intense in his nature. He was a quiet child - he preferred to silently observe rather than run around poking and shoving things. When layers of dark clouds arrange themselves in the eastern sky outside, moisture-laden breeze wafts deep within his whole heart spreading the scent of the forests; when the rains come thumping down his whole body experiences the music. When the afternoon sun shines overhead, he walks bare-chested on the terrace as though trying to gather something precious from the sky. When the mango trees bloom towards the end of Magh, he experiences a silent joy coursing through his blood - a joy engendered by some undescribable memory; during the month of Phalgun, his inner nature blossoms just like the flowering sal trees and acquires a deep hue. At such times, he likes to sit alone and talk to himself, and to recall all the stories he had heard - the story of the pair of birds which had built its nest in the ancient banyan tree. The wide-eyed ever-staring boy cannot talk much; so he has to take recourse to thoughts to compensate for his lack of speech.

Once I took him to the hills. A thick carpet of green grass sloped gently down the hill in front of our home. The boy was delighted at the sight. He refused to believe that the thick grass carpet on the hill was a stationary, lifeless material. No, he feels the grass is rolling down the hill playfully - rolling incessantly. He, too, loved to roll over the grass - his body would be covered by grass - and, as he rolled, the tips of the grass blades tickled him and he would giggle in delight.

The golden rays of the sun gently descends from the hill tops in the morning after the overnight rains and shines over the deodar trees - he stealthily creeps out of the house without informing anyone and stands awestruck under the shade of a deodar tree. His body quivers in amazement - it is as though he can discern human life within these giant trees. They don't talk but seem to know all secrets. They appear to him like grandfathers of yore who lived during the reigns of kings.

It is not that his gaze is always directed upwards; I have often seen him roaming in my garden as if searching for something on the ground. With unbound curiosity he bends over the new fragile seedlings as they cock up their ruffled heads towards the sun as if asking them, "What next? What next? What next?" The seedlings are his incomplete story. He has some kind of special affinity with the tender newly-emerged leaves as though they are of the same age. They too seem to be craving to ask him some questions. Perhaps they ask him, "What is your name?" Or perhaps they ask, "Where is your mother?" Bolai tells them, "I don't have a mother."

1. The tiger is known for aggression while the cow has a calm temperament. Of course, you can't keep them in the same enclosure because if you do so the tiger will attack the cow. The snake is stealthy and the mongoose is agile. The snake and mongoose are arch enemies; you can't keep them in the same cage. However, the characteristics of the tiger, the cow, the snake, the mongoose, and other animals are all present in human beings. These characteristics balance each other, and are in complete harmony within human beings. For instance, the aggression in human beings is balanced by the calm temperament characteristic.

These characteristics are akin to musical notes. Suppose you play a single note, say "sa", continuously, it will not sound pleasant to the ears. But when you string together all the notes - sa, re, ga, ma, pa, dha,ni - to play music, it will sound wonderful. That's the case with the animal characteristics as well; when all these characteristics reside together in harmony they lead to perfection. And that happens in human beings.

But how does this relate to Bolai's story? Well, let's turn back to our musical notes analogy. Music emerges out of melody, harmony, and rhythm. But even in a piece of music you may have some notes you play more often than the other notes. For instance, you may play "sa" more often; "sa", then, surpasses or dominates other notes. In the same way, some characteristic may dominate others; the "calm temperament" characteristic may be more dominant in some people which makes them more calm and less prone to aggression. In Bolai's case, a love for plants and trees was the dominant characteristic.

Kindly note that this explanation is based on personal interpretation of the story, and you may not find it satisfactory.