Where are the numbers? I can see only one 8 in the quotient and the final remainder is 0. All the rest are stars. How can I ever solve this!

Anyway, let me have a dash at it. First let me list out the things that we know:

1. The divisor is a three-digit number.

2. The dividend is an eight-digit number.

3. The quotient is a five-digit number with 8 in the hundreds place.

4. The final remainder is 0; this means the dividend is completely divisible by the divisor.

In the second step of the division, we again get a two-digit number as remainder and once again two digits (the seventh and eighth) of the dividend have to be dropped down. Two digits of the dividend can be brought down simultaneously only by adding a zero to the quotient. Therefore, the quotient is of the form: *080*. The quotient is looking somewhat respectable with only two stars giving it a scary look now.

By the way, here are all the stars substituted by the actual digits: 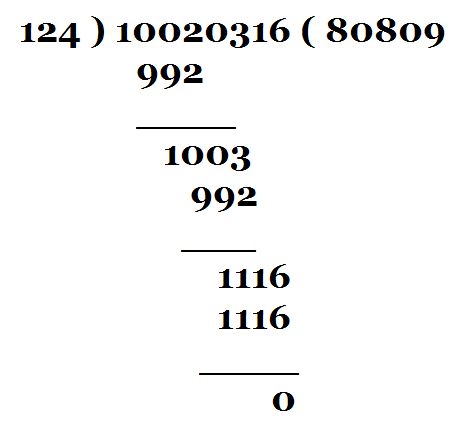 Well, I have spent hours trying to solve it and managed to get the answer after attacking the problem in my own clumsy manner. I am sure there must be a simpler and elegant way of solving it. I am sure you can work out an elegant and simpler solution.