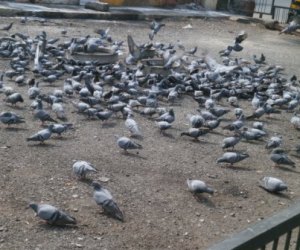 (This is only a poor translation of "Nadan dost", a story by Munshi Premchand. The objective is merely to acquaint readers with Premchand's writings and to exhort them to read the original story if they have not already done so. This story is about two children who discover eggs laid by a bird on the cornice of their house. The children feel that the eggs are unsafe and they should do something to protect them. They handle the eggs and the eggs get destroyed. The children, in their innocence and lack of wisdom, truly feel that they are helping the mother bird by transferring the eggs to a more comfortable place. But their good intentions only leads to the destruction of the eggs. The title of the story "Nadan dost" would loosely translate into "Naive friend". It is an apt title because the children think they are friends of the birds, but act unwisely. Sometimes even our good intentions can cause harm if we act out of ignorance. Nature has equipped all living creatures to take care of themselves; the mother bird knows what is best for her eggs and the children should not have touched them.)

A bird had laid eggs atop the cornice in Keshav's house. Keshav and his sister, Shyama, were thrilled and spent hours gazing intently at the pair of birds flying in and out of their nest incessantly in a flurry of activity.

The instant the brother and sister woke up in the morning, they would make a dash and take their position below the cornice; they would find the birds quietly perched. Both the children derived such immense pleasure from gazing at the birds that they would forget their meals. The nest and the eggs were not visible to the children, so a great many questions arose in their inquiring minds: How large were the eggs? What was the colour of the eggs? How many of them were there? How will the chicks hatch? How will the little birds grow wings? How was the nest made? But there was no one who could answer these questions and satisfy their curiosity - their mother had no time from her household chores while their father was always busy with his reading and writing. The children satiated their curiosity by talking between themselves.

"Brother, will the chicks fly away immediately after hatching?" Shyama would ask.

Keshav would answer her with an air of an intellectual, "No, stupid. First, they will grow wings. How can they fly away without wings?"

"What will their mother feed them?" was Shyama's next question.

This was, however, a very difficult question for Keshav, and he avoided offering an answer.

Three to four days passed away in this manner; the children's inquisitiveness increased with each passing day. They longed to get a look at the eggs. They were certain that the chicks must have emerged from the eggs by this time. Now, it was the question of food that concerned the children; where will the mother find seeds to feed so many chicks? The poor chicks will surely die of hunger.

This thought frightened the children, and they decided to take matters in their own hands. It was settled they would place some seeds near the cornice. Shyama was happy with the decision. "The mother and father will not have to fly out in search of food if we put the seeds, will they?" she asked.

"No, they will not have to go in search of food," Keshav said.

"Brother, don't you think the chicks must be uncomfortable in the hot sun?" Shyama asked.

This probable discomfort of the chicks had escaped Keshav's notice. "Of course, they must feel uncomfortable," he said when Shyama drew his attention to this aspect. "The poor chicks must be writhing with thirst; there is not even a spot of shade atop the cornice."

The brother and sister held a long consultation, at the end of which it was decided to hang a cloth over the nest to shield it from the sun. They also decided to place a bowl of water and some rice grains near the nest.

The children set to work. Shyama scooped out a handful of rice grains from the bag stealthily when her mother was looking the other way. Keshav managed to find a stone bowl, which had a little oil in it; he cleaned the bowl after throwing away the oil and filled it with water.

Obtaining a piece of cloth was the biggest problem. From where could they find a cloth wide enough to form a good overhead hanging? Even if the cloth was found, how could it be hung? There were no supporting props on the cornice to which the cloth edges could be tied.

Keshav contemplated this difficulty for a long time and, then, hit upon an idea. "Go and get the waste paper basket from below," he told Shyama. "Don't tell mother."

"The basket has a hole at the bottom. How will it protect the birds from the sun?" Shyama asked.

Shyama's lack of faith in his abilities annoyed Keshav. "You go and fetch the basket, I will find some way to close the hole," he said irritably.

Shyama hurried away and came back with the basket. Keshav rolled some paper and pushed it through the hole to plug it. He, then, positioned the basket against the branch of a tree so that its shadow fell on the nest and said, "See, how can the sun shine over the nest now?"

"My brother is very clever," Shyama thought to herself.