A Peek Into the Past 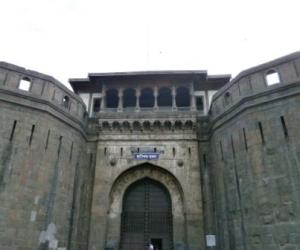 Shaniwarwada is the most famous landmark in Pune. My first tryst with Shaniwarwada was over four decades back when I was merely five or six years old. It was the Ganesh festival and the neighbours had decided to have an outing in the evening to admire the Ganapati idols. We lived in Khadki then (It was known as Kirkee at that period of time). Khadki was only about five kilometres from the city but to a child of my age, it was like crossing the seven seas.

Excited beyond words, I clung to my mother and looked at the magnificent Ganesh idols completely awestruck. Walking through the lanes and by-lanes, we passed Shaniwarwada. The mansion was hardly visible in the night but as we passed by it, someone from our little group - someone who apparently enjoyed telling a good story - happened to remark that late in the night, cries of "Kaka mala vachva (Uncle, save me) can be heard coming from the ruins. I remember absorbing that bit of information with a sense of foreboding. I kept turning back all the time, expecting to hear the scream to ring out.

Years passed and I never had an opportunity to visit Shaniwarwada. It was while in college that I made numerous trips to the vicinity of Shaniwarwada since most college book shops are located there.

Looking at the magnificent exterior of the Shaniwarwada is like stepping inside a time machine that takes you into the past. According to the Pune District Gazetteer and the information displayed inside Shaniwarwada, the palace was built as the chief residence of the peshwas. The peshwas were prime ministers who later became all-powerful hereditary administrators of the Maratha Empire till the Empire's end in 1818.

The walls have nine bastions and five gateways. Of the five gateways, two each are in the north and east walls and one in the south wall. The most imposing gate that faces Delhi in the north is called the "Delhi Darwaja". The other gate, a smaller one, is to the east of the Delhi gate and was called "Jambhula" gate and later renamed as "Narayan" gate after Narayanrao peshwa. The two gates on the eastern wall are called "Khidki (window) Darwaja" since it opened through a smaller window, and the "Ganesha" gate. The fifth gate is in the south wall and is called "Mastani" gate after Mastani, the second wife of Bajirao I. The gates have big wooden doors with large iron spikes to ward off elephants at a time of attack.