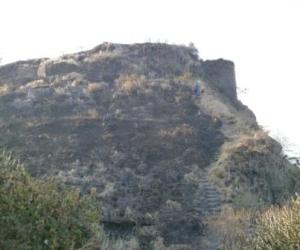 Maharashtra is a land of forts which stand as silent sentinels while offering a glimpse of the past. The Sinhagad Fort is situated about 30 kilometres from the heart of Pune city, and is a favourite weekend getaway for people wishing to momentarily escape the daily hustle and bustle of city life.

A favourite picnic spot now, Sinhagad Fort was once a battleground witnessing fierce battles for its possession - the most epic battle being the one fought in 1670 when Chhatrapati Shivaji's forces, led by Tanaji Malusare, recaptured it from the Moghuls; a battle that is now a folklore in Maharashtra.

A visit to the fort is, therefore, like entering a time machine to take you into the past. There is a road - a narrow and not very ship-shape one though - that takes the visitor right up to the fort situated on a cliff at a height of about 2300 feet or 700 metres from the plains. But for the adventurous and the trekkers it is the laborious climb from the base of the fort that holds more excitement.

A bus, from the city, takes us to the base of the fort after an almost one-hour journey. Then begins the climb. Without further ado, I started marching. But there are no marchers ahead nor behind me. This, at first, does not bother me. But very soon I reach a point which appears not to have been treaded before. It is like a cul-de-sac. What do I do now?

There was not a soul in sight from whom I could seek directions. So, I turned back and was contemplating my next move when I espied a local approaching with a huge load on his shoulders and breathing heavily. I asked him the directions and he showed me the right path.

Then I was on my way, merrily rushing ahead in the hope of reaching the summit shortly. A climb of 700 metres could at the most take me 30 minutes, I calculated - a calculation that was utterly incorrect as I found out later. The climb became a bit harder as time progressed, and my poor legs started complaining. But the fort was still nowhere in sight!

The solitary march had begun to be somewhat disconcerting. But soon I saw three youngsters carrying on relentlessly ahead, and that was motivating. However, I was thrice their age and could not keep pace with them, with the result that they soon disappeared from sight and I was back to being alone.

Now the poor legs refused to budge. So, what could I do? I sat down on a boulder and rested for a while. Soon I saw a man, certainly a few years older than me, bounding down with the agility of a soldier. He had been to the top and was now making the descent. I complimented him on his fitness and asked him how far was it to the top. "This is just the beginning," he told me with a grin. That left me quite deflated because I had been at it for nearly an hour, and thought I had almost reached the top.

Nevertheless I chalked out a strategy - I walked 200 steps, rested for a while, and then resumed my progress. That strategy worked well and my legs thanked me for it. I later learned this was not a good strategy at all.