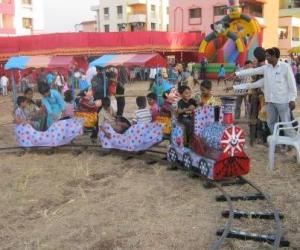 (This is only a feeble translation of "Eidgah", a story by Munshi Premchand. The objective is to urge readers to read the original, or better translations.

The story centres around Hamid, an orphan boy around five years old who is looked after by his grandmother. The grandmother, Ameena, is poor and has to struggle hard to make ends meet. Today is Eid, but there is nothing in the house with which to celebrate the occasion. Ameena yearns for her son Abid; if only Abid had been here things would have been so much better.

Hamid is going to the mosque along with the other villagers. After the prayers, the children will enjoy themselves at the fair. Ameena has saved some money, and she gives Hamid three paise so that the little boy can buy some toy or sweets at the fair.

Hamid feels very happy, and he skips along with the other boys; these boys have more money than him. At the fair, the other boys enjoy a ride on the merry-go-round; but, Hamid cannot indulge in such fun because he has only three paise. The other boys buy toys. Hamid longs to hold a toy in his hands, but his wish remains unfulfilled. He must not waste his three paise on such trivial pleasures. After buying toys, the other boys move on to buy sweets. Hamid clings on to his three paise. No, he must not waste the money on buying sweets. The other boys make fun of him. They pretend to offer a portion of their sweets to him, but when Hamid stretches his hand to take, they instantly put the sweets into their own mouths.

The boys move ahead to enjoy a glass of juice. Hamid lingers behind and observes some tongs displayed in a hardware store. All at once the boy thinks of his grandmother; he thinks about how she burns her fingers while baking bread. If she has a pair of tongs, she will not burn her fingers. He must buy a pair of tongs. But the tongs cost six paise. The little boy haggles with the shop owner who agrees to sell the tongs for three paise.

Hamid returns home. Ameena wants to know why he spent his money on buying a pair of tongs. When Hamid tells her the reason, Ameena is overcome with emotions and she starts crying like a child. The five-year-old boy had resisted all temptations to buy toys and sweets, and had instead thought of his grandmother and bought her a pair of tongs. The boy had shown maturity beyond his years!)

After 30 days of fasting and prayers, Eid has finally arrived. It is such a beautiful morning. The trees appear much more greener than usual, there is an exceptional cheerfulness in the fields, and the sky has a stunning reddish glow. Look at the sun today; it is endearing and appears so cool as though greeting the world on Eid.

There is a bustle in the village; people are getting ready to go to the mosque. Someone discovers that buttons are missing from his kurta (loose shirt), and he is rushing to the neighbour's house to fetch needle and thread; someone else discovers that his shoes have become hard, and he has to run to the oil seller for oil to soften the footwear. There is a hurry to place fodder and water before the farm animals; it will be quite late in the afternoon when the villagers return back to their homes from the Eidgah. It is almost a six-mile walk, and, besides, scores of friends had to be visited and greeted on the way. It will be impossible to return before noon.

Boys are the happiest. Some of them had fasted only for a day, and that too only till noon. Many others had not observed the fast at all. But all of them are eager to go to the Eidgah. Fasting was for grown-ups; for them, it was Eid. Every day they had awaited the arrival of Eid, and it has finally come. The boys are getting restless to go to the Eidgah; domestic affairs does not concern them. What do they care whether there is milk and sugar in the house to make sevaiyya (a sweet dish); they are there to eat sevaiyya, and not to arrange for the milk and sugar. How are they to know why their fathers are rushing to the house of Chaudhary Kayamali. How can they know that if Chaudhary Kayamali wished, the Eid celebrations could turn into a day of mourning!

The pockets of the fathers might be empty, but the pockets of the children are bulging with coins. Every now and then, they remove the coins, count them, and put them back. Mahmood counts one, two, ten, twelve. He has twelve paise. Mohsin has one, two, three, eight, nine, fifteen. He has fifteen paise. They have a countless hoard, and they intend to buy countless things: toys, sweets, bugle, ball, and what not!