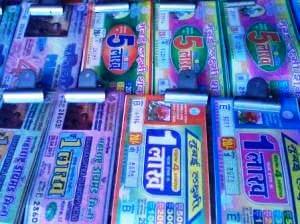 (This is a feeble translation of a story by Munshi Premchand; it is only to acquaint non-Hindi readers with Premchand's stories. Much better translations are available, which the readers may wish to read. We are republishing this story. There is a summary of the story on the last page.)

Who does not want to become rich quickly? In those days when lottery tickets were on sale, my friend Vikram's father, uncle, mother and elder brother each bought a ticket. Who can say whose fate would be favoured? Anyway, whoever won, the money would remain in the house after all.

But Vikram was impatient. If any of the others won, he would at the most get 5,000 to 10,000 rupees as gift. What was he to do with such a small amount? He had lofty ambitions. First of all he wished to tour the world; every corner of the world. Peru and Brazil, and Timbuktu and Honolulu - all of them were a part of his itinerary. He was not among those who returned after a whirlwind tour of just a few months. He wished to stay at each place for a long time, study the customs and practices of the people and, thereafter, write a massive tome. He also wished to build a huge library that would house the best literature from across the world. He was willing to spend a few lakhs of rupees on creating the library. A bungalow, car and furniture were, well, minor necessities. If his father or uncle won the lottery, he could expect at the most 5,000 rupees from them; if mother won, she would be more generous and he could expect to receive 20,000 rupees; but if the lottery was won by his brother, then Vikram was unlikely to get even a single rupee. Vikram had his pride, and to accept a gift from someone was humiliating. He always said, "It is better to jump into a well and drown rather than spread your palms before anyone. If a person cannot create a space for himself on this earth, it would be better if he departs from here."

He was unemployed. Who would give him money to buy a ticket? And, besides, how could be beg for money? After careful thought, he turned to me and suggested, "Why don't we team up and buy a single ticket between the two of us?"

The suggestion appealed to me. I was a school teacher and it was very difficult to meet both the ends on the salary I received. To purchase a lottery ticket for ten rupees was, for me, like buying a white elephant! Yes, I could cut down on my expenses for a month and afford to spare five rupees. But, I still hesitated.

"I will sell off this ring and tell my people that it had slipped off my finger," Vikram said. The ring was quite expensive and we could easily buy a ticket after selling it. If without having to spend anything I could get a 50 per cent share in the ticket it will be wonderful, I thought.

But Vikram jolted me awake from the reverie with his cruel words, "Brother, unless you pay me five rupees in cash, I will not make the deal with you."

At this, I became conscious of my morals. "No friend, this is unbecoming. The truth will become known if you sell the ring, and you will face embarrassment. I, too, would be blamed."

After a lengthy discussion we finally decided to sell off our old books to a second-hand books dealer and buy a ticket from the proceeds. Books were our only unworthy possessions. Both of us had stopped studying further after completing our matriculation. We had discovered that those who did study further after matriculation and obtained degrees were only wearing off the soles of their shoes in search of employment. We, therefore, decided to call a halt after matriculation. I became a school master and Vikram continued to enjoy life.

Other than providing a feast for termites our old books were of no use to us. During our school days we had extracted all the juice from the books and, now, we were least concerned whether rats feasted on them or termites.

We removed the books and put them in a sack after brushing the dust off them. I was a teacher and, so, it was embarrassing for me to approach a book seller - all of them knew me. I, therefore, entrusted this task to Vikram. He returned after 30 minutes while flourishing a ten-rupee currency note. I had never seen him so happy before! The books were worth not less than 40 rupees but to us, then, it seemed as if we had picked up the ten rupees just like that from the road. Now there will be a 50-50 partnership. We will receive a sum of ten lakh rupees from the lottery. Five lakh rupees will come to me as my share, and five lakh will go to Vikram. We were lost in these pleasant thoughts.

I was content. "Five lakh rupees is not a small amount," I said.

But Vikram was not so very satisfied. "Five lakhs is a huge amount, and for us even 500 rupees is a big sum at this moment. But brother, I will have to change my plans. My global tour cannot be cancelled. I will have to scrap my plan to open a library," he said.

I objected. "You will not have to spend more than two lakh on the tour," I pointed out.

"That works out to around 4,000 rupees every month. I think you can manage your tour quite comfortably on a monthly expenditure of 2,000 rupees," I suggested.

Vikram was rather cross at the suggestion. "I wish to live lavishly and not like a beggar," he said.

"It is only if you give me two lakh that I can have my library."

"Is it necessary that your library should be the best in town?"

"I will have the best library."

"I cannot spare two lakh from my share. Just think of my needs. You are from an affluent family and you do not have any responsibilities. I am the sole bread-winner for my family - have to marry off my two sisters; have to educate my two brothers; have to buy a house. I have decided to deposit the entire amount in a bank and meet my expenses from the interest. While keeping the amount in the bank I will impose certain conditions so that no one is able to withdraw the amount after me."

Vikram was sympathetic. "Yes, it is unfair to ask you for money. Alright, I will put up with some inconvenience. But the interest rates have fallen sharply."

That was true. I had checked with several banks and the interest rates were very low. Why don't we get into the money-lending business, the idea suggested to me. Vikram could postpone his tour and both of us in partnership could build up a good business. He could go on his tour after we had amassed some amount. We would earn good interest in the money-lending business, and our credibility in the society too would rise. But money should not be lent unless the security was good even if the borrower was well-known. But, then, why should we lend money on security? There would be no risks involved if the borrower mortgaged his property.

The business plans were finalised. Now the question before us was in whose name the ticket should be purchased. Vikram was keen that the ticket should be in his name. He threatened that otherwise he will not buy the ticket. I could see no way and therefore had to agree, and that too without signing any contract! That caused me some problems later on as you shall see.

Days passed and our anxiety heightened. With the break of dawn each day, our eyes would involuntarily scan the calendar. My house was adjacent to Vikram's. Every day, before going to school and after returning from school, we would discuss our fortunes in whispers so that no one could listen to us. We wished to keep it a secret that we had bought a ticket. We imagined the surprise that people would get when we finally won the lottery; the thought thrilled us.