The tale of two bullocks 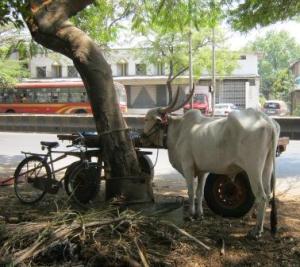 (This is only a poor translation of a story by Munshi Premchand. The objective is to exhort readers to read the original, or better translations. Anthropomorphism is the attribution of human traits and emotions to animals. Do animals feel the same way as people? I don't know; I don't think it is likely. But if they could, it would have have been fun; it would have easier for people to understand animal behaviour. This is a tale about the adventures of a pair of oxen who have been loaned by their master to his in-laws. Heera and Moti are very good friends. Just as you get to see in human friendship, these two have very different characteristics; even in friendship, opposites attract! Moti is rather aggressive and hot-tempered and, if he has his way, wouldn't mind taking his enemies head-on; Heera, on the other hand, is tolerant and wise. The two, of course, don't realise that they have been loaned but think that Jhuri, their master, has sold them. They refuse to go, but are forced to go anyway. Then, begin their adventures! The two break free and return to Jhuri. But, once again, they are taken away by Jhuri's brother-in-law Gaya. The two are ill-treated and not fed properly. The bullocks escape once again and this time are helped by a little girl. The girl unties the ropes and releases the bullocks. Moti wants to flee at once but Heera hesitates; he knows that the girl would be suspected of releasing them. That's Heera's compassion and wisdom for you! Next, the friends encounter a bull. Here, again, Heera's cool-headed nature saves the day; he devises a plan and the bull is defeated. Moti's rashness gets them into trouble once again. Despite Heera's caution, Moti enters a field to feed on peas. The guards catch them; Heera could have run away and escaped, but being a loyal friend he does not flee. The two are taken away to a cattle pound. The two are able to help other animals in the pound to escape but they themselves are unable to do so because Heera is tethered. Now, Moti could have escaped but, this time, it is he who chooses to remain by Heera's side. Their greatest crisis looms when the two are sold to a slaughter house. Would there be an escape for the friends this time? Yes! This time it is luck which favours them, and the two are able to return back to Jhuri, their affectionate master, to heroes welcome.)

The donkey is regarded as the most stupid among all animals. When we want to describe someone as an idiot of the first order, we call him donkey. It cannot be decisively stated whether the donkey has earned this ill repute owing to its really being stupid, or because of its simplicity and unafraid tolerance. Cows do not hesitate to show their horns when in a belligerent mood, and cows with calves are as fierce as lionesses. The poor dog also gets angry and cross some times. But I have never seen an angry donkey. You may beat it as much as you want and feed it rotten stuff, but there will never be even the shadow of discontentment on its countenance.

But, then, I have never seen a happy donkey either. The donkey wears a permanent melancholic expression which does not alter under any circumstances. In times of happiness or in times of sorrow, in times of gain or in times of loss - the melancholic expression does not change. This is actually the quality of saints and sages who remain unaffected by worldly matters; all the sage-like qualities have reached their pinnacle in a donkey! Yet, man calls it stupid! I have never seen good qualities and virtues being treated so unfairly. Perhaps, simplicity is not the best policy to follow in life. Consider, for instance, the plight of Indians. Why aren't they allowed into America? The poor fellows only want to save some money for the rainy day - they don't drink alcohol, they work hard, don't ever quarrel with anyone, and tolerate all insults without a murmur. Yet, they are looked down upon and are accused of lowering the ideals of life! If, perhaps, they had learned the principle of "an eye for an eye, and a tooth for a tooth", they would have been regarded as "civilised".

But the donkey has a younger brother which is only slightly less of a donkey; and that animal is the bullock! There are some people who believe that the bullock is the most stupid among all animals. But I beg to differ. The bullock sometimes attacks and shows its stubborn-ness. There are other ways in which a bullock expresses its discontentment; therefore it occupies a position below the donkey in the scale of stupidity.

Jhuri Kachi had two bullocks by the names of Heera and Moti. Both of them were of good stock. They were magnificent looking, hard workers, and of great size. Having lived together for quite long, both the bullocks had developed a sort of kinship. Both of them would sit facing each other, and converse in a silent language. I cannot say how they could understand each other's thoughts. Surely they must have possessed some mysterious powers from which even man, who claims to be supreme among all animals, is deprived. The bullocks would lick and sniff at each other, and express their affection. Sometimes the two would lock horns, not out of any aggression but rather good humoredly - when friendship becomes deeper, some back-slapping is natural, else the friendship seems to be superficial. When the two bullocks were yoked to a cart and walked swaying their shoulders from side to side, each would try to bear the maximum burden on its own shoulders. After a hard day's work when the two were untied and released, they would lick each other and relieve their weariness. When fodder was placed before them, they would both put their mouth to the trough simultaneously and if one lifted its head from the trough the other would do the same.

Who knows whether they felt bad at being sold but when Jhuri's brother-in-law Gaya came to take them away, both of them showed the least inclination to go. If God had blessed them with the human tongue, they would have asked Jhuri, "Why are you driving away poor animals like us? We have not left any stone unturned to give you the best service. If you were not satisfied with our work you should have given us more work to do. We are ready to lay down our lives in your service. We never complain about the fodder you give us - we keep our heads bowed down and eat whatever you give us. Then, why have you sold us to this tyrant?"

But by evening, both the bullocks were taken to their new place. They had not eaten anything since morning but, despite this, when fodder was placed before them, neither of them touched their mouth to the trough. Their hearts were heavy - they had been displaced from the home which they had considered as their own. These new place, new village and new people were all strangers to them.

They concurred between themselves in their own silent language, and then lay down. When the village went to sleep, the two tore the ropes that tethered them and marched towards home. The ropes were very strong but the two had acquired some special powers and the ropes had snapped like cords.

Jhuri woke up in the morning to find the bullocks in the pen. Their legs were crusted in mud and there was a sparkle of affectionate revolt in their eyes.

Jhuri was overwhelmed with joy on seeing the bullocks, and he rushed to them and embraced them affectionately. This display of affection was a very moving sight!

Children from the house as well as from the neighbourhood gathered near the pen and welcomed the two by clapping their hands. This incident might not have been unprecedented in the history of the village but it was significant nevertheless. The children decided that the two brave bullocks should be awarded certificates - so, some of them brought bread from their homes, some brought jaggery and the others brought fodder.

One child declared it was unlikely that anyone else had such brave bullocks.

Another child agreed. "They have come back from so far away all by themselves," he pointed out.

A third child conjectured, "They were humans in their previous birth."

No one dared to challenge the statement.

But Jhuri's wife was unhappy. "These are very ungrateful bullocks," she said, "they could not even work for a day but had to run away".

Jhuri could not tolerate the criticism directed at the bullocks. "Why should they be ungrateful?" he retorted. "They might not have been fed and, so, what could they do?"

"Yes, it is only you who know how to feed the bullocks. The others just keep the animals alive by giving them water," his wife retorted scornfully.

"Why else should they have run away?" Jhuri teased his wife.

The wife was angry. "They ran away because my people do not foolishly pamper the bullocks like you do. If they feed the animals, they also like to extract maximum work out of them. These two are lazy and, so, ran away. Let's see from where they get oil cakes and bran. I will not give them anything else but dry chaff. They may either eat that or die of hunger."

That is what happened. The servant was instructed that the bullocks should be given only dry chaff and nothing else.

The bullocks put their mouths to the trough but the food had no taste. What to eat! They looked up hopefully at the gate. Jhuri told the servant, "Why don't you put some oil-cakes?"

"Go and get some secretly."

"No Sir, you will also take Madam's side behind my back and blame me."

The next day Jhuri's brother-in-law came again and took away the bullocks after yoking them to a cart.

Moti attempted to topple the cart on a few occasions but Heera maintained the balance and prevented the cart from toppling. He was more tolerant.

Reaching home in the evening, Gaya tethered the bullocks with much stronger ropes. He put before them dry fodder while feeding his own bullocks with oil-cakes and bran.

Moti and Heera had never before met with such insult. Jhuri never struck them, not even with a stick covered with flowers. But here they were hit. The dry fodder added insult to the injury and the two did not even raise their eyes to the trough.

Gaya yoked the bullocks to a plough on the next day; but it was as if Moti and Heera had vowed not to move an inch. Gaya was weary from striking them, but the two remained where they were. The tyrant took a stick and hit Heera across the muzzle. This infuriated Moti beyond endurance and he tore through the field taking along the plough, rope, yoke and harness which were shattered to pieces. Had they been free of ropes, the bullocks would never have been caught.

"It is no use trying to run away," Heera said in the silent language.

Moti answered in the same language, "He had almost killed you. Now he will strike us."

"Let it be so. We are bullocks and cannot avoid being struck."

Gaya, accompanied by two men with stout sticks in their hands, approached the bullocks.

"They are coming with sticks. Should I teach them a lesson?" Moti asked.