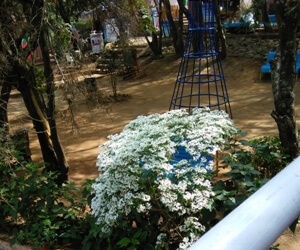 Ouch! Love tortures! Of course, it tortures those in love, but it also troubles those who are not in love. I mean, a man who admires a woman can torment another man who is in no way a part of the love triangle. It is getting complicated, so let me narrate an incident that explains it better.

This incident occurred long ago. The office declared a two-day holiday for Diwali, and the colleagues decided to organize an outing. We made up our minds to spend a pleasant afternoon in peaceful country surroundings. The spot chosen was quite near, around an hour's journey by bus.

We hired a bus and headed for the place. There were around twenty of us; women made up for half the number. We had a wonderful time. A river flowed gently; there were plenty of trees; in short, it was a perfect setting for a film shoot. We had a wonderful time. We played games, danced, joked, and talked cheerfully; we forgot that a drab place called an office existed.

It was time to return. We got on the bus. I am a lazy fellow who does not like to do things in a hurry. So, I was the last to get on the bus. Only the back row of seats was vacant. I went and sat on the right side of a girl who had taken up the window seat. Being office colleagues, I knew her. But let's not identity the people; let's call her Mon.

I was wrong; I was not the last person to get on the bus. Pop came darting and apologized profusely for being late. He had to sit to my right.

The bus started. And so did Pop; he started singing romantic songs at the top of his voice. I could not blame him; the picnic spot had been so beautiful that I presumed he must still be hanging out there in his mind. So, whenever he finished a song and paused for breath, I encouraged him by humming a tune for the next song.

However, after a while, it became very troublesome. Pop started to lean against me, almost bringing his mouth near my face. The fellow suffered from halitosis; his bad breath was intolerable. But I could not say anything and had to suffer in silence.

Why should the fellow lean against me? Why couldn't he sit straight? Then, I realized that he must have a crush on Mon. He was singing for her benefit. He was pushing against me so that he could bring himself nearer to his intended audience!

So, for one hour, I had to tolerate the songs and the bad breath. It was the most unpleasant journey in my life. I was thankful when the bus dropped us off at the destination.

By the way, this incident occurred over two decades ago. It seems the songs did not make any impression on Mon. She married Boz and has settled abroad.