Glimpse of the Artistic Past 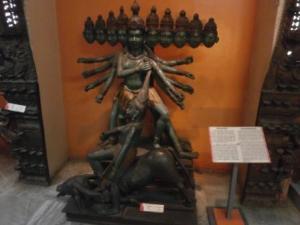 If you expect to see exotic artifacts in Pune's Raja Dinkar Kelkar Museum you will be sorely disappointed. The Museum does not display "out of the world" exhibits; rather, what you get to see are things that were in everyday use in the 18th and 19th centuries.

And the things which were in everyday use in the 18th and 19th centuries, were works of art! They were exquisitely made, combining art with functionality - be it the humble nut cracker, the vegetable cutter, or the collyrium and sindoor containers.

What is remarkable is the fact that these artifacts were collected by one man, Padmashree Late Dr D G alias Kakasaheb Kelkar, over a period of 65 years while touring across the country. The Raja Dinkar Kelkar Museum was established in 1962 and donated by Dr Kelkar to the Maharashtra Government in 1975.

So, if you wish to take a peek into the past and want to understand how people lived two or three centuries ago, just step into the Museum. That is what I did. I paid the entrance fee of 50 rupees and an additional 200 rupees to click pictures, and slipped into a world so different from today's.

The Museum has two wings - Wing A, spread over the ground floor, first floor, second floor and third floor, has galleries which display artifacts pertaining to beauty and culture, utensils, and textiles. Wing B, spread over the second floor, first floor and ground floor, has a lamps gallery, musical instruments gallery, Mastani Mahal - a recreation of an 18th century mansion, and an ivory gallery.

Among the beauty and culture artifacts are collyrium and sindoor containers, kumkum boxes, vajris (foot scrubbers), sandalwood artifacts, rose water sprinklers, hair dryers and silver ornaments. These artifacts have mostly been collected from Maharashtra, Gujarat, South India, and Rajasthan. The vajris, sindoor and surma boxes have beautiful bird and animal motifs, and figures of humans and deities.

There are a large number of nut crackers - among which are exquisite animal-shaped nut crackers from Maharashtra, Gujarat and South India dating back to the 18th and 19th centuries. There are lime containers, spittoons and trays also from the same period.

The entrance to the galleries are guarded by "Yalis". These lion-faced creatures with sharp teeth and claws are usually placed at the entrances of temples in South India. The tall fearful looking sculptures are portrayed standing over demons as though crushing evil beneath their feet. The Museum has a collection of idols made from wood and clay and belonging to the 19th century. While the mouse is Lord Ganesha's vehicle, the Museum has an idol showing Ganapati riding a horse.

The Museum also has a collection of weapons - there are loaded guns from the period between 1670 and 1940, there are gauntlet swords, kanpattimar, gurj, knives, hatchets and dau. There is also a tiger claw (waghnakha) - a weapon which immediately brings to mind visons of Chhatrapati Shivaji killing his foes using a "waghnakha". There are armours dating back to the 18th century - there is an armour made of fish scales, and an armour made from crocodile skin.

The long coats and caps on display suggest that people in the past were quite fashionable. The textile gallery displays Paithanis, Chandrakalas, and other saris from Maharashtra and Gujarat. This portion of the Museum also displays a number of string puppets.

Mastani Mahal is the recreation of the palace built by Peshwe Bajirao I for his beloved Mastani who was the daughter of Chhatrasal Bundela, the king of Bundelkhand .

Dr Kelkar in his lifetime collected over 20,000 artifacts, but the Museum has been able to display only a small portion of the collection owing to constraints of space. The Museum, through its collection, gives a glimpse of the lives of people in the past. Visitors may step out of the Museum with different impressions about life in the past; I walked out of the Museum and bang into the 21st century with the impression that while we are more technology-oriented, the people in the past were more artistically inclined.