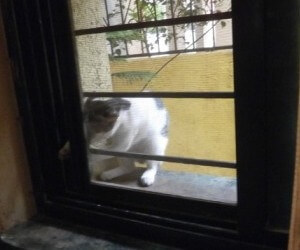 A neighbour had some teensy-weensy yellow-coloured birds in a cage that he hung outside the house. The birds hopped about in their tiny cage all day long and did nothing else. I wondered what pleasure the neighbour must get from keeping the birds; his children or he hardly had any time to even look at the birds. It must be dreadful to be caged! Then, I experienced what it is like to be caged, and my jailors are a bunch of stray cats!

It all started when a kitten appeared from nowhere, crying piteously. Now, who can remain unmoved by a tiny bundle of fur with eyes that pierced the heart? I placed a saucer of milk, and the kitten lapped it up. I must say I don't like cats. Dogs, yes. Cats, no. So, it was not my remotest intention to adopt the kitten; but, I didn't have the heart to shoo it away, and hoped it would go away on its own. It didn't.

I wouldn't take it inside the house. But since it continued to remain outside, I had to give it milk. Few days later, I discovered that an adult cat had appeared and was lapping up the kitten's milk. I shooed, and it scooted. But, from that day, I have always seen it prowling nearby.

There is one thing about cats that I would like to possess - their sense of smell. What a fantastic sense of smell they have! Over a period of time, two more cats appeared and I am certain it is owing to their sense of smell. The smell of food must have reached them wherever they were, and they had come to explore. So, now, there are four cats prowling about the premises.

My affinity towards the kitten probably makes the cats think that I am one of their feline species. That has made matters worse. The moment I step out, the cats, lying in wait outside, come running up to me as though I am an inexhaustible source of food. They force their familiarity on me, and brush their bodies against my legs. One of the cats has the nasty habit of meowing incessantly when I come out.

I don't like it at all. I have stopped stepping out! I have to open the windows to get some fresh air. But, this too isn't doing me any good. The moment I open the windows, the cats sniff me out and come leaping up on to the window sill. So, I keep the windows closed too!

Poor birds! I know now what it is like to be caged; I am caged in my own house by four cats!