Straight from the Arabian Nights! 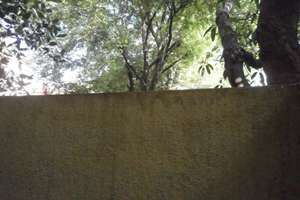 Among the first story books I read after learning my alphabets was the Arabian Nights. That was decades ago! I have only hazy memories of the stories now, but one story that has remained etched in my memory is of the merchant who stops to rest and eat. The merchant eats the dates he has brought along with him and tosses away the seeds. Suddenly a demon appears and threatens to kill the merchant because the seeds, which he had tossed away, had struck the demon's son and killed him!

I have not been able to forget this story and, after the incident that happened to me a few months ago, I am unlikely to forget it ever.

I am addicted to tea. Offer me a cup of tea any time of the day or night, and I shall never say "no".

There is a a tea stall just outside the office where I work. One evening I went to the tea stall for my favourite cuppa. The stall has shoulder-high brick walls on two sides. There was a large crowd of tea drinkers at that time and I could not find a place to sit. So I stood resting my back against a side wall and sipped my tea contentedly.

There was open space beyond the wall. I took out a cigarette, lighted it, blew off the match-stick and, without giving much thought, flicked it over the wall.

I, then, brought the tea cup to my lips when suddenly arose from the other side a dark form. As I told you, it was evening and quite dark. There was buzz of tea drinkers all around, and it was quite noisy. The dark form took human shape and attacked me with his words. "What do you think you are doing? Don't you have eyes?"

I was flabbergasted at this sudden attack. I had no idea as to what he was talking about.

I asked him quite amiably what was the matter.

The human shape said, "Why are you throwing match-sticks at us? (I had flicked a single match-stick!)"

Things became clearer. On the other side of the wall, a few men were sitting on the ground, probably on boulders, and chatting. The tea stall was quite noisy and I had not heard them. Besides, the wall was quite high and it was dark; I could not seen them. The open ground beyond the wall appeared to be no man's property; so, I did not give any thought while flicking away the match-stick.

I had a hard time convincing the human shape that it was an unintentional act; I had no intention to burn him. The human shape finally cooled down. But, for a brief period, it seemed as if my days on this good old Planet Earth were over. The men picked themselves up and went away realizing it was not a safe place to sit; some other tea drinker could unintentionally pour water over them. I sighed in relief.

Well, that incident has changed me for a better person. You will never find me flicking away match-sticks; I always find a waste bin to deposit them!