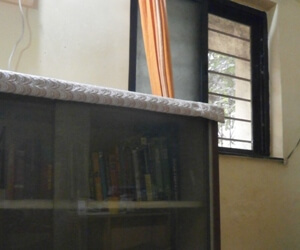 I am a late riser and wake up around 10 a.m. every day. I read the newspaper headlines first, brush my teeth, and bathe. It is usually past noon when I finally sit down for breakfast!

I am a freelancer and work from home. After breakfast, I sit at my desk, switch on my computer, and do my work. I have the room all to myself, which I share only with Tepi, my cat. Tepi does not bother me. She settles down in her chair and goes to sleep.

Not another creature can enter the room. The room has two doors and two windows, but the doors remain shut all the time. Each window has three sliding panes: two with opaque glass panes and one with a wire mesh to prevent mosquitoes and flies from entering. I slide both opaque glass panes to one side of the window and the wire-meshed pane to the other side. It allows the light to enter but bars any creature from entering.

Tepi has learned to slide open the panels with her paws and can go out whenever she pleases; she doesn't have to request me to open the windows or the doors to let her out.

I have provided such elaborate details to explain that apart from Tepi and me, no other creature — not even a fly — can enter the room without my permission.

The other day, I sat at my desk and was immediately disturbed by a knocking sound. The sound seemed to be coming from a bookshelf with sliding glass-paned panels next to one of the windows. Something or someone was knocking at the panel. I am afraid of snakes; the first thought that struck me was that a snake might have slithered into the bookshelf. It did not occur to me that snakes could not or would not knock on panels even if they happened to get inside the shelf.

It had to be ghosts! Thuk, thuk, thuk … the knocking continued. I chanted the name of Lord Rama. I was about to throw the door open and rush out when it occurred to me that the sound could be coming from the window pane. The bookshelf was so close to the window that I could not be sure of the source of the sound. Who could be knocking on the window pane? It could not be thieves; they don't announce their arrival. Friends don't need to knock.

Hesitatingly, I went to the window and slid the panel open. There was a flurry of wings, and something flew past me in a hurry. Was it a bat — the ally of ghosts? No, it was only a robin pecking at the window pane. The knocking stopped for good after it flew away.