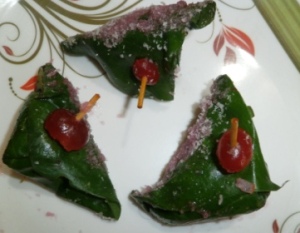 If people avoided me because they thought I brought them ill luck, I shall feel very miserable. However, if people thought I brought them good luck and made a beeline to catch a glimpse of my face the first thing in the morning, it would make me feel good at first but, if this continued, my life would become much more miserable!

"Bohoni", a story by celebrated pre-Independence era writer, Munshi Premchand, narrates the misery of a man thus afflicted. It is, or used to be, a common superstitious belief among shopkeepers that if a "lucky" person made the first purchase (bohoni) from their shop, they would do good business throughout the day; on the other hand, if an "unlucky" person were to make the first purchase, the business would suffer.

A nice and simple story that, perhaps, is also trying to convey that life would be a lot more easier if we learn to say "No"; always trying to be in the good books of others might not be a good idea after all.

The other day when a new betel leaf shop opened across the road from my house, I was elated. There wasn't any other betel leaf shop within 200 metres of my house. I had to make several trips to the corner of the road where there was always a huge crowd of buyers. Sometimes, I had to wait a long time before my turn came; I found this wait very exasperating.

I don't remember when and how I became addicted to betel leaves. But if someone were to keep folding betel leaves into neat triangles and giving them to me, I would, perhaps, never refuse to accept. If not a large part of my income, a small portion went into satisfying my craving for betel leaves.

Many times, I had resolved to buy a paandaan(box for holding betel leaves). But buying a paandaan is no child's play. For me, it was akin to buying an elephant. Even if I picked up the courage to buy a paandaan, it will be no fairy's magic bag that I could dip my hands in and draw out a folded betel leaf whenever I wished. I would still have to buy betel leaves from the market, wash them, check for rotten leaves and discard them, and fold the good ones into triangles five times a day; not an easy task by any means! I have seen women from wealthy families spending the whole day looking after the paandaans. If I were capable of going through such trouble, I, too, would have made it big in life!

But, suppose I find some way out of this trouble, who will slice the areca nuts? The very sight of the scissors makes me shiver. In case it is necessary and unavoidable to undertake such work, I use a mortar and pestle to grind the nuts. But don't ever ask me to use a scissor; I will never touch that thing! Whenever I see somebody using a scissor-cutter to slice the nuts, it astonishes me. It is as astonishing as seeing someone dancing on the sharp-edged blade of a sword.

If the paan-seller adds more lime by mistake, one can always scold him and take a little more catechu to neutralize the effect.

The real problem occurs when you visit a friend's house, and the paan is brought to you from the women's quarters. You have to eat it even if it is like swallowing a fly or gulping poison. You cannot complain; politeness acts as a constraint. Sometimes when you pop the paan into your mouth, it feels as if the tongue is on fire — as though someone has forced hot mercury into your throat. But you can say nothing. It is beyond my comprehension as to how mistakes of this kind can occur; I admit I am a greenhorn, but even I don't apply so much lime. I think these are not mistakes but deliberate acts; it is an expression of their wrath! When you roll your sleeves and raise hell because breakfast is late, the only way the women can take their revenge is by adding more salt to the curry or by applying more lime to the paan!