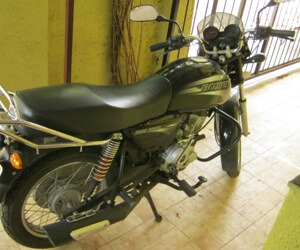 Whew! I almost got thrashed a few days ago because of my habit of jumping to conclusions.

The store was quite close to my house, and I could have walked. But it had rained; the road was wet, and there were puddles of water. I did not want to walk on the messy road.

There were shops almost touching the road on either side. There was no place where I could park my motorcycle without causing inconvenience to other vehicle drivers.

There was a small piece of open land. It led to a cattle shed, which was situated about 10-15 metres away. A man was brushing the animals.

Two cars were alread parked on the open land. But there was enough space to accommodate my motorcycle. As I was getting the vehicle on the centre stand, the man started yelling at me. I was wearing a mask. Anyway, I am short of hearing, and he was at some distance. I could not make out what he was saying. But I inferred he was telling me not to park my motorcycle.

That made me furious. Did the land belong to him? The cattle shed was 10-15 metres away, and there was no gate barring entry into the open space. So, I thought the land could not belong to him. Who was he to tell me not to park my vehicle? I yelled back and said some very nasty things.

I had not noticed the truck, which had slowed down on the road behind me. The truck driver stuck his head out of the window and spoke to the man at the cattle shed. So that was it. The man was talking to the truck driver and not to me. He had to shout to be heard because of the distance, and I thought he was yelling at me. I did not park my motorcycle but quickly rode away before the man could come up and thrash me for saying nasty things.