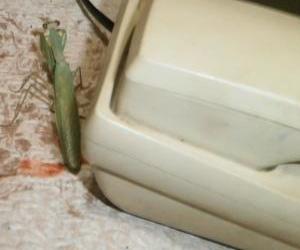 Life can be gloomy if you have to remain indoors the whole day. But a cup of tea and a praying mantis can enliven up things.

I made myself a cup of tea and stood by an open window. Suddenly, some flying object hit me in the face causing me to spill the tea. A few droplets entered my eyes, blurring my vision.

I rubbed my eyes clean with a handkerchief, cleaned up the mess on the floor, and turned my attention towards identifying the culprit.

I found the culprit; it was a fresh green leaf. Oh no, it was not a leaf! Closer inspection revealed it was a praying mantis.

After slapping me, it was clinging to the edge of the table-covering. It was swaying from side to side like a drunk.

I must evict the trespasser. I lunged at it, but it side-stepped and crouched behind the telephone.

Want to make a call, do you? I can't allow you any free calls.

I was about to make another attempt at swatting the fellow but checked myself. You can't be sure; looks can be deceptive, and this harmless-looking chap could be harmful. Why not check the insect's characteristics on the Internet before attempting anything rash, I thought to myself. It was not going away anywhere in a hurry and seemed content to remain behind the phone.

The computer was already on, and I typed "praying mantis" in the search box. "Praying mantises are harmless to humans," I read and felt quite reassured.

It is a carnivore and likes to feast on moths, crickets, grasshoppers, flies, and other insects, I read.

"The insect can eat others of its own kind, and the adult female sometimes eats her mate just after, or even during, mating. It does not deter males from reproduction," I was informed.

"The praying mantis gets its name for its prominent front legs, which are bent and held together at an angle that suggests the position of prayer," I learned.

To me, however, this creature's posture suggested it was warming up to spring on me. As for praying, it was swaying from side to side like one who has had too many. No place of worship would have admitted a devotee in such a tipsy condition.

I was directly behind the insect. It turned its triangular head slightly, and I could see it staring at me with bulging eyes. How would you feel if you are behind someone and that someone looks at you by just rolling its eyes, without even turning its head?

"Mantids can turn their heads 180 degrees and scan their surroundings with two large compound eyes and three other simple eyes," the Internet told me.

I had enough of this praying mantis. There was a door by my side; I opened it and prodded the intruder to change direction and face the door. I, then, nudged it with a folded newspaper towards the door. The fellow took the hint and dashed for the great open spaces. I closed the door immediately.

Well, life is not gloomy, after all. Even a tiny praying mantis can enliven up things!