(This is a feeble translation of a satire by Bankim Chandra Chattopadhyay. This is a delightful conversation between Kamalakanta - an opium addict, and a cat. Although outwardly humorous, the conversation is, in fact, a hard hitting dialogue about the disparities in society. It is a biting satire on life) 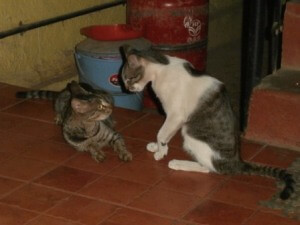 I was dozing while sitting on the charpoy with a hookah in my hand. The flickering light from the lamp threw moving shadows on the wall, which looked like dancing ghosts. Meals had not yet been served and, so, with the hookah in hand, I engaged myself in deep contemplation to pass the time - the question uppermost in my mind was whether I could have won the Battle of Waterloo had I been Napolean. Just then, there was a low sound, "Mew".

I opened my eyes but could perceive nothing at first. The immediate thought that came to my mind was that Wellington had come to me in the guise of a cat and was begging to be given a share of the opium. I steeled myself and was about to tell him, "Duke, you have received ample rewards in the past; there can be no further rewards for you. Unbounded greed is not good." The Duke interrupted my unspoken words and said, "Mew."

I rubbed my eyes to get a clearer look. It was not Wellington, but a cat! The cat had finished the milk, which Prasanna had kept for me; I had been so busy planning a strategy for the battle that I had not noticed the cat's actions. The feline beauty, satisfied with the world after consuming the milk, was now announcing its pleasure by sweetly calling out, "Mew". I cannot say whether the "Mew" had a tinge of sarcasm in it, but I felt it was telling me, "I have drunk your milk; what do you have to say?"

What could I say? The milk did not belong to me. The milk belonged to Mangala; Prasanna had milked her. Thus, if I claimed any right over the milk, then the cat, too, had an equal right. I could not be angry. But there is an age-old custom: If a cat drinks milk, it must be chased away. I could not go against that custom; else I would be a blot on humanity. Besides, if I did not chase her away, it was likely that the cat might ridicule Kamalakanta as a coward among her feline friends. It was, therefore, imperative for me to act correctly. I put aside the hookah, found myself a broken stick after considerable search, and dashed towards the cat.

The cat was acquainted with Kamalakanta; she did not express any alarm at the sight of the stick. She just looked at my face, let out a yawn, and moved aside. "Mew?" she asked. I could comprehend the meaning of the question and, therefore, threw away the stick and went back and sat on the charpoy, picking up the hookah.

The cat's question, as I comprehended, was thus: "Why this show of violence? Why don't you smoke your hookah and reflect with a clear mind? In this world, why should only people enjoy all the good things like milk, fish, and meat? Why should we not get a share of them?"

"You are human beings, and we are cats; don't we feel hungry and thirsty like people? We don't object when you eat. But when we eat, people come and chase us away. I have not been able to understand this human behaviour even after much contemplation. You would do well to accept some advice from me; human beings cannot progress unless they receive education from quadrupeds. After visiting your schools and seeing for myself what kind of education is imparted there, I think you too must have realised the truth of my words."

"Look here, you sleeping man! What is religion? Doing good unto others is the best religion. I am feeling good after drinking this milk; the milk intended for you has done me good. You are, therefore, the recipient of the fruits of the supreme religion. I may have stolen your milk, but that has only led to an accrual of the good work done by you. I am, thus, responsible for the preservation of your religion. Therefore, instead of hitting me, you must applaud me. I have assisted you in upholding your religion."